The Thunderbirds are the air demonstration squadron of the United States Air Force (USAF), based at Nellis AFB in Las Vegas, Nevada. They tour the United States and much of the world, performing aerobatic formation and solo flying in specially marked aircraft.

The name is taken from the legendary creature that appears in the mythology of several indigenous North American cultures. They are the fastest flying (multiple jet) flight demonstration team in the world.

Officers serve a two-year assignment with the squadron, while enlisted personnel serve three to four years. As the squadron performs no more than 88 air demonstrations each year, replacements must be trained for about half of the team each year, in order to provide a constant mix of experience. In addition to their air demonstration responsibilities, the Thunderbirds are part of the USAF combat force and if required, can be rapidly integrated into an operational fighter unit. Since February 15, 1974 the Thunderbirds have been a component of the 57th Wing at Nellis AFB. Since 1953, they have flown in front of more than 390 million people.

In 1983 the team switched to the F-16A Fighting Falcon; this transition had been under consideration before the "Diamond Crash" during training season in January. The team sat out the 1982 airshow season and spent that year retraining and transitioning over to the new aircraft to ready themselves for the 1983 season. In rebuilding the Thunderbird Team, the Air Force recruited previous Thunderbird pilots, qualified each in the F-16A, and had them begin by flying "two-ship" maneuvers, then expanded the program one airplane at a time up to the full six airplanes. Beginning in June 1982, the F-16 Thunderbirds were led by Major Jim Latham.

The team continues to fly the F-16, having switched from the F-16A to the F-16C in 1992. Only a few minor modifications differentiate a Thunderbird from an operational F-16C. These include the replacement of the 20 mm cannon and ammunition drum with a smoke-generating system, including its plumbing and control switches, the removal of the jet fuel starter exhaust door, and the application of the Thunderbirds' glossy red, white, and blue polyurethane paint scheme. All of the modification work is performed at the maintenance depot at Hill AFB near Ogden, Utah.

The Thunderbirds have performed at over 4,000 airshows worldwide, accumulating millions of miles in hundreds of different airframes over the course of their 54+ years of service.

During the switch to the F-16A the Thunderbirds acquired new block 15 aircraft which they operated from 1983–1991, making the team one of the last USAF units flying the older F-16A's before transitioning into new C's. They also operated the two-seat F-16B during this time for training new pilots and for VIP flights, these being replaced by the F-16D when the rest of the squadron transitioned to the F-16C.

The block 32H/J aircraft currently assigned to the Thunderbirds were built in 1986 & 1987, and operated by the Thunderbirds from 1992–2008. At their retirement, they were some of the oldest operational F-16s in the Air Force.

In the 2009 show season the Thunderbirds transitioned to an updated version of the F-16 fighter. The Block 52s have an upgraded avionics package that brings the Thunderbird fleet into alignment with the rest of the worldwide F-16 fleet. Additionally, the more powerful Pratt & Whitney F100-PW-229 engine adds an additional 3,600 lbf of thrust. This in turn increases the maximum allowable gross weight for ground handling, taxi, takeoff and in-flight maneuvers by nearly 5,000 lb. 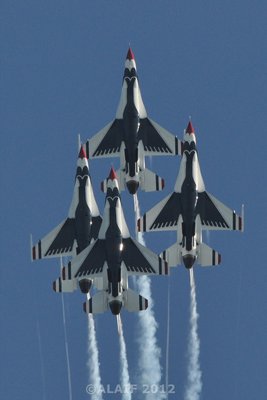