The Royal Air Force Aerobatic Team, the Red Arrows, was based at RAF Kemble, then a satellite unit of the Central Flying School, itself based at RAF Little Rissington, which was considered the "official" home base of the Arrows.

Arrows' aircraft would frequently fly into Rissington for maintenance. When RAF Scampton became the CFS Headquarters in 1983, the Red Arrows moved there. As an economy measure, Scampton closed in 1995, so the Red Arrows moved just twenty miles to RAF Cranwell; however, as they still used the air space above Scampton, the emergency facilities and runways had to be maintained.

Since 21 December 2000, the Red Arrows have been based again at RAF Scampton, near Lincoln.

The first team, led by Squadron Leader Lee Jones, had seven display pilots and flew the Folland Gnat T1 jet trainer. The first display in the UK was on 6 May 1965 at Little Rissington for a press day. At the subsequent National Air Day display, three days later, at Clermont Ferrand in France, one French journalist described the team as "Les Fleches Rouges", confirming the name "The Red Arrows".

By the end of their first season, the Red Arrows had displayed 65 times in Britain, France, Italy, Holland, Germany and Belgium and were awarded the Britannia Trophy by the Royal Aero Club for their contribution to aviation.

In 1968, the then Team Leader (Sqn Ldr Ray Hanna) expanded the team from seven to nine jets, as he wanted to expand the team's capabilities and the permutations of formation patterng

It was during this season that the 'Diamond Nine' pattern was formed and it has remained the team's trademark pattern ever since. Ray Hanna served as Red Leader for three consecutive years until 1968 and was recalled to supersede Squadron Leader Timothy Nelson for the 1969 display season, a record four seasons as Leader which still stands to this day.[2] For his considerable achievements of airmanship with the team, Ray Hanna was awarded a bar to his existing Air Force Cross (AFC).

The Reds have no reserve pilots, as a spare pilot would not perform often enough to fly to the standard required. If one of the pilots is not able to fly, the team flies an eight-plane formation. However, if the Team Leader, 'Red 1', is unable to fly then the team does not display at all.

Each pilot always flies the same position in a formation. The pilots spend six months from October to April practising for the display season. Pilots wear green flying suits during training, and are only allowed to wear their red flying suits when fully qualified

During an aerobatics display, Red Arrows pilots experience forces up to five times that of gravity (1g), and when performing the aerobatic manoeuvre 'Vixen Break', forces up to 7g can be reached, close to the 8g structural limit of the aircraft.

The team use the same two-seat training aircraft used for advanced pilot training, at first the Hawker Siddeley Gnat which was replaced in 1979 by the BAE Hawk T1.

The Hawks are modified with an uprated engine and a modification to enable smoke to be generated, diesel is mixed with a coloured dye and ejected into the jet exhaust to produce either red, white or blue smoke. 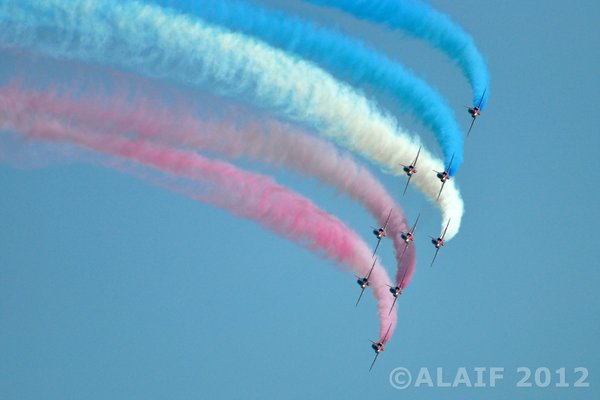