The Blue Angels is the United States Navy's flight demonstration squadron. It was formed in 1946, making it the second oldest formal flying aerobatic team (flying under the same name) in the world, after the French Patrouille de France formed in 1931. The Blue Angels' six demonstration pilots fly the F/A-18 Hornet in more than 70 shows at 34 locations throughout the United States each year, where they still employ many of the same practices and techniques used in their aerial displays in 1946. An estimated 11 million spectators view the squadron during air shows each year. The Blue Angels also visit more than 50,000 people a show season (March through November) in schools and hospitals. Since 1946, the Blue Angels have flown for more than 260 million spectators. 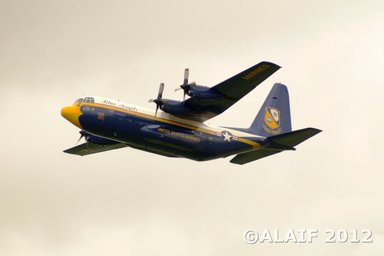 During their aerobatic demonstration, the Blues fly six F/A-18 Hornet aircraft, split into the Diamond Formation (Blue Angels 1 through 4) and the Lead and Opposing Solos (Blue Angels 5 and 6).

The fastest speed flown during an air show is 700 mph (just under Mach 1) and the slowest speed is 120 mph.

Some of the maneuvers include both solo aircraft performing at once, such as opposing passes (toward each other in what appears to be a collision course) and mirror formations (back-to-back. belly-to-belly, or wingtip-to-wingtip, with one jet flying inverted). The Solos join the Diamond Formation near the end of the show for a number of maneuvers in the Delta Formation.

The parameters of each show must be tailored in accordance with local weather conditions at showtime: in clear weather the high show is performed; in overcast conditions a low show is performed, and in limited visibility (weather permitting) the flat show is presented. The high show requires at least an 8,000-foot (2,400 m) ceiling and visibility of at least 3 nautical miles (6 km) from the show's centerpoint. The maximum ceilings allowed for low and flat shows are 3,500 feet (~1 km) and 1,500 feet (460 m), respectively.

The Blues' F/A-18 Hornets are former fleet aircraft that are nearly combat-ready. Modifications to each aircraft include removal of the aircraft gun and replacement with the tank that contains smoke-oil used in demonstrations, and outfitting with the control stick spring system for more precise aircraft control input. The standard demonstration configuration has a spring tensioned with 40 pounds (18 kg) of force installed on the control stick as to allow the pilot minimal room for uncombined movement. The Blues do not wear G-suits, because the air bladders inside them would repeatedly deflate and inflate, interfering with the control stick between the pilot's legs. Instead, Blue Angel pilots tense their muscles to prevent blood from rushing from their heads and rendering them unconscious.