The F-16 Solo Display Team of the Belgian Air Force is based at Florennes Air Force base for the first year of a new 2 or 3 season cycle.

In the past, numerous pilots of the Belgian Air Force have flown the F-16 as Solo Display. The responsibility for providing the demo pilot wasn't based on fixed rules, but did shift between the operational airforce bases.

When Cdt. John Vandebosch of 31 sqn passed the torch to Cdt. Michael Artiges in 2006 it was decided to give the F-16 Solo Display Team a more cyclic character.

For the second consecutive year Captain  Avi Renaud "Grat" Thys of N° 350 Squadron based at Florennes will be   the Lockheed Martin F-16AM  Solo display pilot  flying the spececially decorated  F-16AM FA-84. Aged twenty nine, "Grat" obtained his wings as military pilot in 2004 and totalises 2.000 flying hours, 1.500 of them on Lockheed F-16AM.

The demo might seem spectacular to the general public, but in fact contains standard F-16 manoeuvres which are flown during practise sessions as operational missions.

The only difference between real life operations and this demo is that these manoeuvres are flown in a smooth pattern and at very low altitude.

This does mean the demo puts a lot of G forces on the pilot which limits the demo to a maximum of around 10 minutes, giving the audience an overview of the F-16's manoeuvrability and the skills of all F-16 pilots in the Belgian Air Force.

For the 2012 demo season a new F-16 needed to be painted in full demo colors. Since the team switched from Kleine Brogel AFB to Florennes AFB another airframe was found in the form of #FA-84. Since the introduction of the more colorfull colors of last years' "Vortex", this years jet at least needed to be as colorfull as the former.

The main color is a blue top side with some grey, black and white touches together with a "Belgian touch" in the form of a subdued roundel on the tail fin and tricolore leading edges of the stabs and trailing edges of the wings. The underside of the airframe is mainly in silver.

The design was realised by Bruno Ghils and Sylvain Hauthier, thoroughly executed by the Florennes paintshop. The complete history of F-16 #FA-84 can be found in the profile page on F-16.net.

The figures the pilot flies with the F-16 are standard figures which every F-16 pilot within the Belgian Air Force masters.

The difficulty concerning this show is to perform all those figures in a fluent composition as well at low altitudes of around 500 ft (150m). 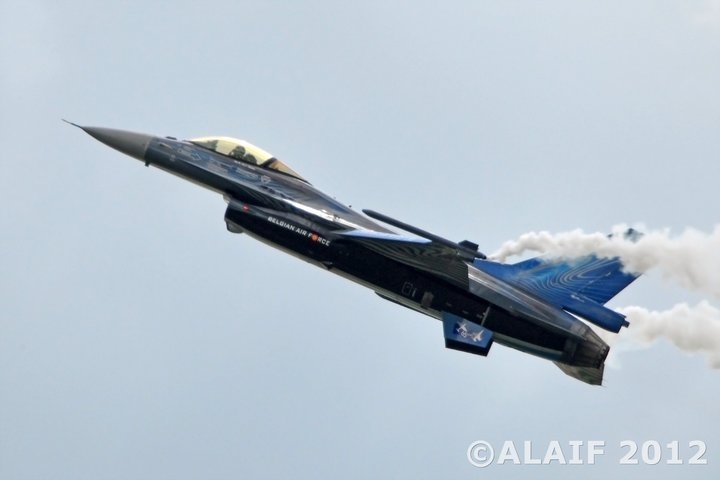