is a mid-size, narrow-body twin-engine jet airliner that was built by Boeing Commercial Airplanes from 1981 to 2004. It is the manufacturer's largest single-aisle passenger aircraft.

The twinjet has a two-crewmember glass cockpit, turbofan engines, a conventional tail and, for reduced aerodynamic drag, a supercritical wing design. Intended to replace the smaller three-engine 727 on short and medium routes, the 757 can carry 200 to 289 passengers for a maximum of 3,150 to 4,100 nautical miles (5,830 to 7,600 km), depending on variant.

The 757 was designed concurrently with a wide-body twinjet, the 767, and owing to shared features pilots can obtain a common type rating that allows them to operate both aircraft.

Diminished sales amid an airline industry trend toward smaller jetliners led Boeing to end production without a direct replacement, in favor of the 737 family.

The last 757 was delivered to Shanghai Airlines on November 28, 2005. In 2011, 898 of the narrow-body twinjets were in airline service, and Delta Air Lines was the largest operator, with 185 aircraft. 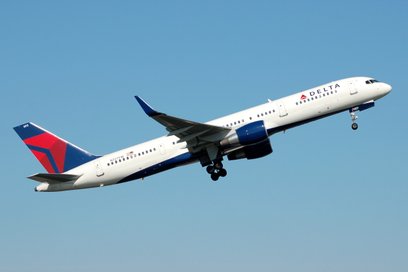 In Europe, British Airways, Iberia, and Icelandair were the 757's largest mainline customers, while other carriers such as Lufthansa rejected the type as too large for their narrow-body aircraft needs.

Many European charter airlines, including Air 2000, Air Holland, and LTU International, also acquired the twinjet for holiday and tour package flights in the late 1980s.

In Asia, where bigger aircraft were commonly preferred because of large passenger volumes, the 757 found fewer orders. A 1982 sales demonstration was unable to attract a purchase from potential customer Japan Airlines, and the first Asian customer, Singapore Airlines, sold its four 757s in 1989 in favor of standardizing on the 240-seat wide-body Airbus A310, just five years after debuting the type on Indonesian and Malaysian routes.

The 757 fared better in China, where following an initial purchase by the Civil Aviation Administration of China (CAAC) in 1987, orders grew to 59 aircraft, making it the largest Asian market.