is the first wide-body commercial airliner and cargo transport aircraft ever build. When it was developed in the 1960’s, the “Jumbo Jet” was two and a half times larger than the Boeing 707, one of the common large commercial aircraft at that time.

First flown commercially in 1970, the 747 held the passenger capacity record for 37 years.

The four-engine 747 uses a double deck configuration for a part of its length.It is available in passenger, freighter and other versions.

Boeing designed the 747's hump-like upper deck to serve as a first class lounge or (as is the general rule today) extra seating, and to allow the aircraft to be easily converted to a cargo carrier by removing seats and installing a front cargo door.

The 747 was expected to become obsolete after 400 were sold, but it exceeded its critics' expectations with production passing the 1,000 mark in 1993. 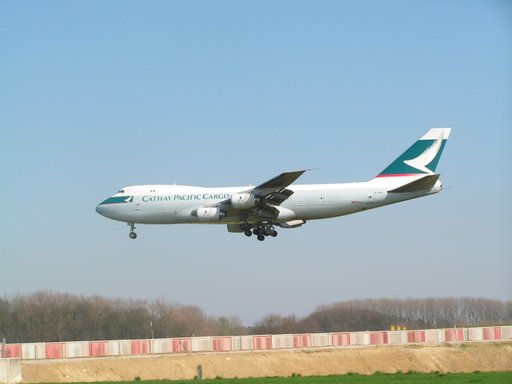 The 747 is to be replaced by the Boeing Y3 (part of the Boeing Yellowstone Project) in the future.

On Sunday May 25th 2008 a 747-209F Cargo freighter operated by KALITTA AIR crashed when it overrun runway 20 during takeoff.

Fortunately it came to a stop just in time before a railway track. Nobody got injured.